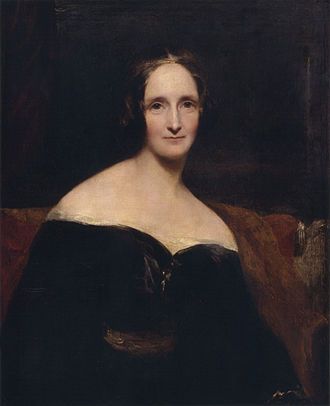 There are not many stories that become as iconic as Frankenstein is there?

When we think about the fact that she started writing it when she was only 18, it makes it even more remarkable.  It's the anniversary of the publication of Frankenstein, otherwise known as "The Modern Prometheus", which was published in 1918.

Mary had an exciting life it seems, travelling around Europe with her lover Percey Shelley, who later became her husband.  She also experienced hardship, with health problems, the death of a child, depression, debt, and the societal reactions to her relationship with Percy, who was radical in his views, her Father's political friend and was already married.

These experiences no doubt shaped her life and writing of Frankenstein and the novels she wrote after.  Percy died in 1822 and she spent the rest of her life promoting his works, along with her novel Frankenstein.   She did however continue to write and there are many other novels out there for you to discover.

A feminist and a good friend, she was also not afraid to follow her beliefs and feelings.    Putting herself in jeopardy for her friend Isabel Robinson, she even helped Isabel and her lover Mary to embark on a life together in France as man and wife, by obtaining them false passports.  Shelley  was also not afraid to show her feminist feelings by offering aid to women whom society disapproved of. About the help she offered, Shelley wrote in her diary: "I do not make a boast-I do not say aloud-behold my generosity and greatness of mind-for in truth it is simple justice I perform-and so I am still reviled for being worldly".

She was a remarkable lady, helped pave the way for other female writers and remains rightly iconic as the author of Frankenstein.  If you would like to read more about Mary Shelley, there is plenty of detail on Wikipedia for you :)